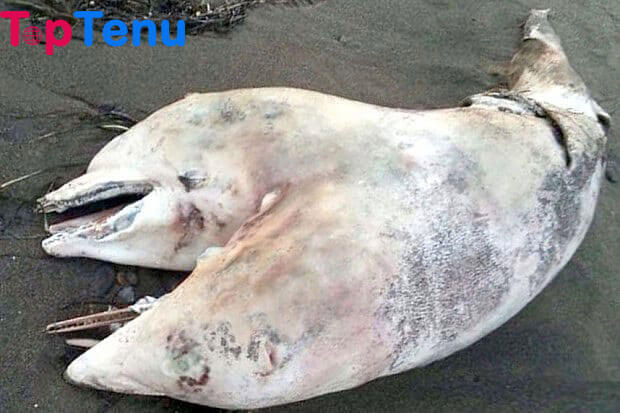 In 2017, Coeur d’Alene, Idaho, became famous for something other than potatoes, a giant dice washed up on the shore, puzzling locals and visitors alike.

Although nobody specifically could guess how this 6-foot by 6-foot random metal object wound up on the banks of tranquil Coeur d’Alene, there were a few educated guesses.

The dice seems to be a shipping container that someone painted large, white dots on, giving off the illusion that some forgetful giant had dropped it during the most epic game of Parcheesi ever.

Eventually, a local named Michele Lytle Gridley fessed up; she and her husband had found the lost shipping container after a massive flood and put vinyl circles on the side of it, creating the dice and spawning a legend.

The Pompano Beach eyeball is a softball sized wonder that briefly put Florida on the map for something other than bath salts or gator wrestlin’. One lucky and possibly forever traumatized beach walker stumbled across the big eye on a leisurely stroll that he or she is likely never to forget.

Instead of tossing it back to the depths, they brought it to the authorities. The single, perfectly round eye was immediately sent to the Florida Fish and Wildlife Conservation Commission for testing.

Although initial reports of the lone eye speculated that it came from a giant squid, whale, or other mysterious denizen of the deep, eventually, the mystery was solved. The eye came from a bug-eyed swordfish, native to those waters.

A quarter of a century ago, a cargo ship carrying 28,000 rubber ducks lost its load and spilled the rubber birds into the Pacific Ocean. Since 1992, people have been finding rubber ducks turning up in all sorts of remote beaches all over the planet.

The doomed duckies first set sail from Hong Kong, but they’ve certainly made their stamp on the international community, winding up in the United States, Ecuador, Canada, Colombia, France, and England. Who knows how many ducks are still bobbing around, infiltrating all our seven seas.

A Lego man, the size of a small adult human, made its way to Siesta Key, Florida, in 2011, wearing a shirt bearing the strange saying “No Real Than You Are.”

This baffling gigantic childhood icon was actually made out of fiberglass, not standard plastic, and was part of a whole flurry of similar Lego men that might be coming to a beach near you.

In 2007, a similar statue showed up in Holland, and the following year another Lego man made his way to Brighton, England. As you’ve probably guessed, these aren’t random occurrences. The statues are thought to be the work of an eccentric Dutch painter, who’s given them the name “Ego Leonard.”

When a Harley Davidson wound up on the shores of British Columbia, Canada, in 2012, it had just made one of the gnarliest journeys known to man.

The mystery Harley had most likely traveled across the entire Pacific Ocean after the 2012 Tohoku Japanese tsunami that decimated the tiny island’s shoreline and caused tons of cargo to spill into the ocean.

Fortunately for the lucky Harley, its shipping container held up over 4,039 miles of ocean, and it arrived fairly intact on the other side.

The honest recipient tried to return it to its rightful owner in Japan but had no luck. It’s unclear whether or not the mighty Harley Davidson ever did hit the road again, but its virgin voyage is the stuff of legends.

In 2016 thousands upon thousands of snowballs washed up on the icy shores of a Siberian beach, proving that mother nature can throw a hell of a snowball fight! These mystery balls stretched across 11 full miles of coastline near the Arctic Circle, and nobody knows for sure how they were actually created.

One theory is that they were the byproduct of a rare mixture of wind, water, and ice, combining in tandem to create the perfect spheres. The snowballs ranged in size, from as small as a tennis ball to nearly 3 feet in diameter; or as wide as your average toddler!

It’s known by the less cringy name, ambergris, and can be used as a base for beautiful perfumes. This particular chunk of ambergris was worth 65,000 dollars, making it possibly the world’s most expensive solidified spew that was ever stumbled upon.

Remarkably, nobody actually noticed the barge creeping up on the beach after a surprise storm dredged up 7 foot waves, slamming debris into the coastline and apparently sending the big barge gliding into shore.

Although it’s well known that St. Pete Beach has plenty of barges floating right off shore, none had dared to breach the shallows and park on the sand until this one did.

Related: 8 Most Fascinating Holes on Earth

In 2012, South African beachgoers stumbled across a macabre vision; a giant 50 foot southern right whale beached on their shores with huge chunks of it missing.

Although big beasts beach themselves all of the time, this whale was in a class all of its own. It was longer than the Hollywood Sign is tall, and riddled with great white shark bites.

It’s unclear as to whether the poor creature succumbed to the shark bites before or after death, but its mere presence on the beach caused a special kind of danger to start stirring in the oceans, specifically a school of great whites attracted by the smell of rotting whale flesh.

Once the whale was safely removed from the scene, the real work began, identifying the cause of death and getting rid of the big body. It’s common for whale carcasses to fill with gas, explode, and litter the beach with disgusting debris.

Fortunately, this creature was taken to a landfill and disposed of safely.

In 2007 a World War II fighter plane washed up in Wales, solving a 60-year-old mystery and instantly becoming one of the most incredible beach finds ever to be unearthed.

The amazing aircraft was known as the Maid of Harlech during its tenure in the Second World War, before it crashed during a training exercise, diving straight into the sea.

Astoundingly, the pilot survived, but the plane itself was lost for the better part of a century. The Maid of Harlech was a Lockheed P-38 Lightning Fighter, one of the most sophisticated aircrafts of its time. It was a huge loss for the allies at the time.

Today, its final resting place is on the Welsh coast and is a protected site that you can pay your respects to and an awesome bucket-list item for any true history buff.

A huge shock when a two-headed dolphin washed up on her shores in 2014. The dolphin, estimated to be only a year old, shocked tourists when it showed up on Dikili Beach after a heavy storm.

Although it’s not uncommon to find random, unfortunate sea creatures on the shore, this dolphin was a true mystery, specifically because of its genetic abnormalities. Tugrul Metin, a vacationing gym teacher, stumbled upon the body of the mutated creature, and it immediately became the must-see macabre spectacle for everyone visiting the beach that day.

Fortunately, Dikili Beach hasn’t seen too many strange creatures pop up on her shores, and we can only hope that the two-headed dolphin was some kind of mutant fluke, and not that the mighty Aegean Sea is teeming with bizarre creatures waiting to make their way to its popular beaches.

In 2000, fossil collector Tony Gill came across the find of a lifetime when he stumbled across a 40-foot-long Ichthyosaur fossil on an English beach. Ichthyosaurs dominated the ancient seas, so there are surely plenty of old bones kicking around the bottom of all of our oceans, but to find a complete skeleton is an incredible event.

The fossil was a full 180 million-years-old with a seven-foot skull; longer than your average person is tall. Gill’s lucky find can teach us more about these prehistoric apex predators, and its bones are now on display at Charmouth Fossils, where you can learn its incredible story and fun facts about the ancient animals that swarmed our seas during the time of the dinosaurs.

Although it’s unlikely that most people will stumble across the full form of an ancient aquatic lizard, people do find dino relics in the sand all of the time, like smaller fossilized creatures or even Megalodon teeth.

Always keep your eyes peeled when you’re walking on the beach. You never know if you might stumble across a priceless piece of the past.

Thanks for Reading! Would you rather stumble across a huge pile of valuable whale vomit or find an intact Harley Davidson on your next walk on the beach? Let us know in the comments section below.