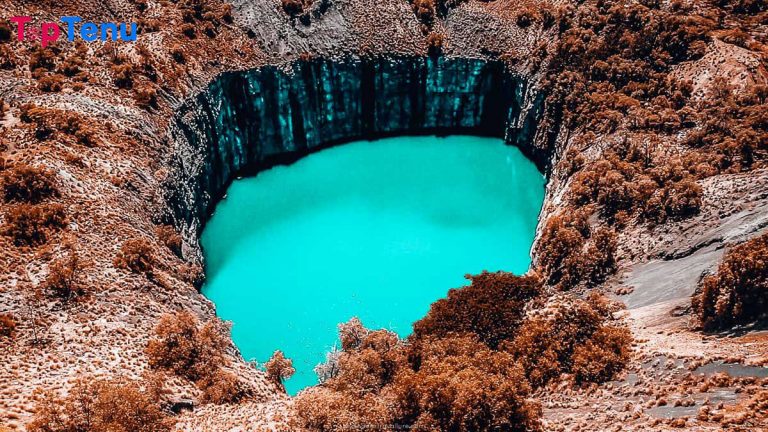 8 Most Fascinating Holes on Earth

Thanks to the 2017 California floods, you can check out this human-made, perfectly round hole designed to stop flooding in the surrounding areas, specifically the fertile wine region of Napa Valley.

The Morning Glory Hole, also known simply as Glory Hole, is a marvel of modern engineering. In 2019, the hole opened up again, this time in response to a rash of storms that hit the region and threatened to flood Napa County’s Berryessa Valley.

The Morning Glory Hole is part of the Monticello Dam, a deliberate funnel chiseled into the dam itself with the express purpose of protecting the vulnerable valley.

The Morning Glory Hole is cement, with a diameter that spans anywhere from 72 to 28 feet wide depending on where you measure it.

While you can’t see this hole all the time, it is worth seeing if you’re planning on stopping by the region during the rainy season, although we strongly suggest that you fight the urge to go for a swim.

Just like any old bathroom drain, the Morning Glory Hole is a spinning vortex that can suck you straight down to your death at the bottom of the dam.

In 2016, the Fukuoka Sinkhole gulped up a full five lines of road in a startling event that left the rattled city with a sinkhole 100 feet in diameter and 50 feet deep. That’s a gaping hole as deep as the Hollywood sign is high, and it happened in an instant.

The Fukuoka Sinkhole immediately flooded with water, making the hectic intersection where it materialized utterly impassable.

Incredibly, given the severity of the sudden sinkhole and the fact that it happened at one of Fukuoka’s busiest intersections, nobody died.

Even more remarkably, the road crews of Fukuoka saw the sudden sinkhole as a challenge; filling it in, repairing it, and even painting new road lines in the span of just one week! So what caused Fukuoka’s 2016 sinkhole.

Officials say that the giant hole was likely the result of gushing underground water, which weakened the surface earth and caused it to collapse. Fortunately, Fukuoka’s all-star road crew was able to check out the piping situation and make any changes before putting the new road in.

For reference, that’s 3.7 times deeper than Niagara Falls is high! The profound depth of Dean’s Blue Hole is just one factor that keeps people coming back for more.

Savvy divers can explore underground caverns and caves right inside of the hole itself, and since the water is exceptionally clear, you can expect to catch some amazing aquatic life as well.

Like all underwater holes, Dean’s Blue Hole can be hazardous, or even deadly, for novice divers. Descending too quickly will give you a serious case of the bends, especially at those depths. Still, if you dare, it might just be worth taking a dive!

What used to be a deep-diving diamond expedition has transformed into the ultimate tourist attraction. Of course, there’s always the possibility that you might just stumble across one of Kimberley’s most famous exports while you’re there, but even if you don’t go home with any of the rich stuff, you’ll still have one hell of a fantastic experience.

Great Blue Hole Belize’s Great Blue Hole is a staggering 984 feet wide and 410 feet deep. Its diameter is nearly the length of the Eiffel Tower’s height, and the cavernous maw of the largest sea-hole on the planet is a favorite of divers and thrill-seekers alike. It’s accessible too; an easy day trip from Belize City.

What really makes the Great Blue Hole such a maritime marvel is the fact that it’s a nearly perfect circle, and its inner chasm contains fascinating, fabulous, and fierce creatures who trawl her depths.

Since the Great Blue Hole is situated smack dab in the middle of the Lighthouse Reef, it’s bursting with exciting reef life, like midnight parrotfish, nurse sharks, and even the occasional hammerhead.

Dip your toes into the azure waters of this phenomenal natural wonder with care, though; novice divers have lost their lives probing too far and too fast into her watery depths.

The most common culprit; nitrogen narcosis, also known as the bends, which can cause otherwise rational divers to lose their sense of direction or even take off scuba equipment underwater.

Regardless, if your nerves and skills allow you to make the trip, the Great Blue Hole is worth checking out!

The 2007 Guatemala City Sinkhole was a tragic fluke of natural fury that claimed 5 lives and caused over 1,000 people to flee their homes in terror.

This behemoth sinkhole was 328 feet deep. For reference, you could stack 10 2-story houses on top of each other and still not clear the depth of this massive sinkhole that, tragically, opened up right in the middle of a major metropolitan city! The culprit? Faulty sewage pipes right below the city streets.

On top of that, the weather in Guatemala City was unseasonably rainy, creating the perfect storm of catastrophic conditions for the massive sinkhole.

Some residents say that Mother Earth gave them a warning, citing strange underground rumblings prior to the deadly collapse.

The sinkhole also had vertical walls, so if it swallowed you or your property into its greedy mouth, you were pretty much a goner.

Alarmingly, geologists warn us that this sinkhole might not be an isolated incident. Although nature’s storm certainly helped shape the course of the disaster, most people think that the Guatemala City Sinkhole was a more human failure. Guatemala’s creaky old pipe system had been giving the residents problems for years, and if there’s any bright side to this tragic turn of events, it’s that city officials know what they need to do to prevent the earth from swallowing up their citizens again.

Xiaozhai Tiankeng Sinkhole has the dubious distinction of being the largest on the planet. It was discovered by accident in 1994 when a China Caves Project tasked with mapping the area stumbled upon the hidden hole, which contains an underground river and a waterfall.

Two big bowls, or levels, make up the Xiaozhai Tiankeng Sinkhole, and each part of the sinkhole is full of fascinating caves, craters, pillars, and other fabulous geological formations that might just give researchers a clue as to how the impressive formation was created in the first place.

Although the initial researchers rappelled down the sinkhole’s walls, you can take it a bit easier if you visit by opting to use the sinkhole’s series of platforms.

Turkmenistan’s Darvaza Gas Crater is also known as the “Burning Gates,” “Door to Hell,” or “Gates of Hell.” With a name that pleasant, you know that this fiery chasm has got to be something special.

The Darvaza Gas Crater is the result of a Soviet blunder back during the Cold War. The Soviets were looking for gas near the crater, and they hit on more than they bargained for when their drilling rig toppled into an underground cavern.

It set the subterranean gas ablaze and opened up the gates of hell for all to see. The Darvaza Gas Crater is 196 feet long, roughly twice the size of your average basketball court, and 65 feet straight into the heart of the oil-rich earth.

The crater’s rotten-egg reek can be sniffed out for miles around the site itself, and it only gets more intense and unpleasant the closer that you get to the hole’s open mouth. Although there’s some speculation as to whether or not the Turkmen government can extinguish the crater, it’s unlikely that the hot fires of hell will be doused anytime soon.

After all, where else can you get a sneak peek into Satan’s living room? Just be sure to hold your nose!

Thanks for reading! Would you rather take a dizzying deep dive into the heart of Dean’s Blue Hole or rappel down the side of Xiaozhai Tiankeng’s epic sinkhole? Let us know in the comments section below.