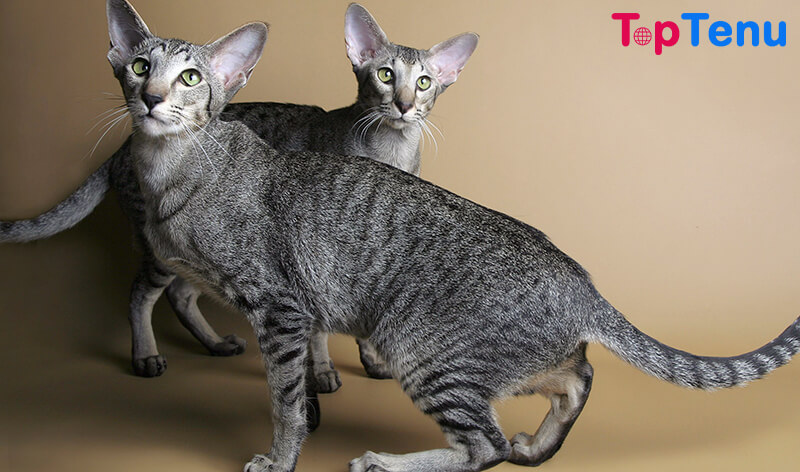 Currently, the world’s rarest and most expensive and Weird cat breeds the Caracat is a cross between a wild caracal and an Abyssinian cat. Priced at 23 thousand 400 dollars apiece.

There are currently only thirty known specimens throughout the globe with wild Caracal revered for their exotic beauty and elegance they have often been depicted in murals and buried with Pharaoh in ancient Egypt’s.

Although sold by some as domestic pets, the Caracat is known for its aggressive traits. A relatively large cat they grow up to 50 centimetres in height and can weigh up to 15 kilograms.

Their black tufted ears can easily distinguish first-generation Caracat and long sharp claws instead of meowing they are known to screech setting them apart from other felines.

If pregnancy does occur, the resulting kittens can be born prematurely due to the difference in the length of gestation between breeds.

An unusual looking cat the Sphinx is known for its lack of fur developed through selective breeding between a hairless cat and a Rex starting in the 1960s.

Experimental breeding seems to have been prevalent throughout the years with the Peter Bald, a cat of Russian origin created by Olga’s Mironova in st. Petersburg in 1994.

The cat resembled an oriental Shorthair and was accepted for Championship class competition in 2009 they are known to have a hair losing gene.

The Peter bald comes in all colours and markings and has a slim and muscular build like the Sphinx.

They are known to be curious smart and energetic there are quite a few varieties of Peter bald cats from the fully bald to those with a sticky touch to their skin.

The name of this miniature feline is the first giveaway with the munchkin short in stature similar to a dachshund energetic and playful this low-riding felines dwarfed appearance.

The fast-moving munchkin is an artful dodger by lying its size anything bud laid-back this cat is full of energy and ready and willing to play with kids other cats and friendly dogs.

They’re capable of jumping on the furniture too so don’t think for a minute they won’t sometimes call Magpies because they love shiny things.

The munchkin is known for hiding its treasures out of sight so secure your valuables from this tiny feline other than their stature they resemble any other cat and are well suited to any home.

you would be forgiven for taking a step back upon meeting the lykoi a feline that looks remarkably like a small werewolf with bald patches around its gleaming eyes the cat was first discovered in a Virginia rescue shelter in 2010 by Patty Thomas who co-founded and named the unusual breed.

Named lykoi after the Greek word for wolves the cat’s appearance is said to be due to a random mutation found only in feral cats. Thomas found the first litter and a second was located by veterinarian Johnny gobble in vain or Tennessee a year.

Later the lykoi is not the result of interbreeding of recognized weird cat breeds. Still, a naturally occurring mutation gobble bred his cats with black cats as they carry genetic similar to the mutation with the resulting litter mainly having black roan fur and black hair sparsely mixed with white described as a fun-loving intelligent breed the leek enjoys the company of humans cats and even dogs with striking facial features slender legs and a muscular frame their code ranges from mostly coded to nearly hairless.

The lykoi multi-year although their coat appears dense they lack an undercoat, therefore, are considered an indoor pet strictly they show wolf-like attributes as they enjoy exploring appear.

With the tail resembling that of a rabbit more so than a cat, the domestic Japanese bobtail is native to both Japan and Southeast Asia.

A naturally occurring and dominant gene mutation is responsible for a near fold that makes a certain breed of the cat appear both unique, and owl-like. The Scottish Fold is a domestic cat that has a mutation affecting the cartilage throughout the body, causing the ears to bend forward and down towards the front of the head.

Originally called lop-eared or lops after the lop-eared rabbit the Scottish Fold was given its name in 1966. There are however several versions of the name depending on registries the long-haired cat is sometimes known as Highland floored Scottish Fold long hair fold or coop the Scottish Fold enjoys the company of people and can often be found participating in whatever they are doing they’re sensitive expressive and active and don’t like to be left alone preferring company even if that company is another cat.

The cat’s heritage is nothing elaborate as it can be traced back to a simple barn cat called Susie who had unusual folded ears. Shepherd William Ross acquired one of Susie’s kittens in 1961.

A rare breed of cat with its origin set in Thailand for hundreds of years. This is a feature of only the rarest variety the Khao manee has a short, smooth close lion coat and is a muscular, athletic cat with a reputation for being active communicative and intelligent.

It is only referenced in the cat book of poems known as the Tamra meow written in the 14th century.

Closely related and developed from the Siamese the oriental Shorthair maintains the modern Siamese head and body type but appears in a wide range of code colours and patterns a domestic cat. The Oriental Shorthair show similar personality traits both are social playful, intelligent and very vocal.

They seek out human action and are happiest when living in pairs the oriental we see today is not a direct descendant of those first developed in Thailand.

Its creation was deliberate with breeders looking for a cat that had the appearance and personality of a Siamese but in a wider range of colours and patterns.

Unfortunately, as a breed derived from the Siamese the Oriental Shorthairs risk of developing health issues is heightened issues typical of their ancestors include neoplastic and gastrointestinal problems.

The Savannah is the largest of the cat breeds. The first cat was born on April 7th, 1986. The domestic and weird cat breeds come in different colors and patterns.

However, The international cat Association teeka breed standards only accept spotted patterns with certain colours and combinations developed to give the impression of the grandeur and dignity of a wild cat with a cheetah type appearance.

It is an intelligent and curious feline and can walk on a leash. This is also keen on water and requires tough, sturdy toys as it can be quite destructive, almost sounds like a dog to me.

Deemed is one of the most expensive and weird cat breeds in the world. The Persian is highly desired for its luxurious coat distinctive round face short muzzle and gentle temperament.

The Persian cat is a purebred with readers asking anywhere from five hundred to five thousand dollars per cat. Many factors can affect the price of a Persian from location to lineage.

However, they are an exceptionally high-maintenance pet you can expect veterinary and grooming bills if you choose one of these as your feline friend they tend to have eye problems and if not regularly combed their coats become matted widely known as Iranian cat in the Middle East and Shiraz cat in Iran.

An aristocratic cat who the Persian is ideal for older people and children. They are affectionate balanced and quiet and require a little more than a comfy sofa or armchair to occupy.

The Maine Coon is a magnificent animal and one of the oldest natural breeds in North America the largest domesticated cat breed. They have nicknamed the dogs of the cat world and are both families friendly and extremely intelligent and interactive.

They have to characterize long Tufts on their ears and toes denser fur on the stomach and rear regents and a bushy raccoon-like tail. These adaptations help them to survive in rough cold environmental conditions.

Often referred to as the gentle giant the Maine Coon is adored for its friendly loyal and obedient nature. The Maine Coon is very trainable and can learn many tricks one of the few water-loving felines.

they have plenty of personalities can walk on a leash and get along well with children and other pets but before you start thinking they’d make an ideal addition to your family some do have a range of serious health concerns including a higher risk for polycystic kidney disease hip dysplasia and hypertrophic cardiomyopathy.

A condition in which the heart muscle becomes abnormally thick so it might pay to do your homework before taking one home.

an incredibly athletic and muscular build the chassis is a domestic breed of cat that was developed by breeding a few individuals from the non-domestic species jungle cat with a far greater number of domestic cats. A distinctive looking cat with a large body not unlike that of its wild ancestors.

The Chausie is categorized as a non-domestic hybrid; however, has a completely domestic temperament their long and strong legs make them quite adept and running and leaping with their striking facial features drawing plenty of attention and intrigue.

The chassis has prominent ears that sit upright and taper to make slightly rounded points. Their coat comes in just three varieties brown ticked tabby, solid black and black grizzled ticked tabby the hair shaft itself is unusual as it starts lighter closer to the skin and gradually gets darker.

The domestic version is affectionate and enjoys company. In contrast, the wild Chausie loves running and needs plenty of space to blow off steam although strong in appearance these cats have a fragile digestive system with many found to be gluten intolerant great news for an owner with the same problem.

yet another jungle-like cat via Ashera was developed by crossbreeding with two exotic wild species. This striking Leopard like a feline was born. A beautiful cat with leopard-like spots and contrasting stripes via Ashera is both elegant and striking at four feet tall on its hind legs.

The Ashera is a big cat that likes to climb and is very playful weighing in at an average of 30 pounds this big cat is capably discouraging any unwanted animals were humans for that matter from entering your home and if you have any other cats on the premises.

They probably won’t be too impressed either developed at the beginning of the 21st century through genetic manipulation in the United States via Ashera cat can only be adopted from the lifestyle pets laboratory.

They cannot reproduce and are all implanted with a chip with a price tag of up to 96 thousand dollars a specimen depending on the type of Ashera choose you would want to be certain this is the right cat for you.

The Selkirk Rex displays three types of coat hair guard on and down hairs however each is wavy giving the Cota soft feel the coats come in all colors.

The Selkirk Rex is considered incredibly patient loving and tolerant sounds like the perfect combination for a new family pet to me who knew there were so many varieties of the family Maggie and much more exotic than you would ever imagine some so exotic.

They appear to have walked straight out of the jungle and into your home imagine the mailman surprised at being met at the door by a big leopard-like cat how about the gorgeous feline that appears to have just left the hairdressers with a fresh perm.

If you like This Article Top 15 Most Weird Cat Breeds in The World then Give him Your Feedback In Comments.