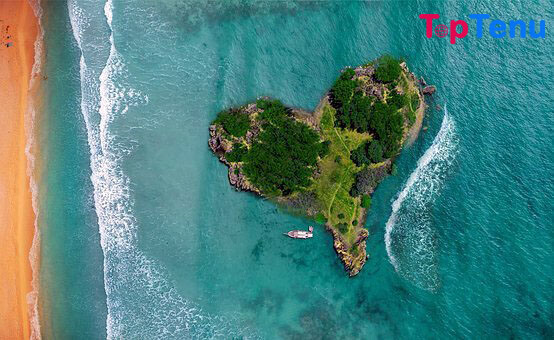 15 Most Beautiful Islands in the World

From Sir Richard Branson to Stephen Spielberg and Johnny Depp, here are 15 wild islands reserved only for the rich and famous.

Angelina Jolie and Brad Pitt became smitten with the 5,000 square foot mansion and its accompanying 1,200 square foot mini-mansion— used as the main guesthouse.

To add character the architecture of the house was designed in a way to make the house pop up close, but blend into the surrounded 200-year beech trees when looking at the property from afar. The entire island is 11 acres wide with a price tag of $19.9 million dollars.

Located off the coast of Greece is a happy haven that was home to the late Greek shipping billionaire Aristotle Onassis. Up until very recently the island remained in the family— per the orders of Onassis’ will— steadfast in the hands of his granddaughter Athina; that is, until she broke the oath and sold the property to heiress Ekaterina Rybolovlev, daughter of Russian billionaire Dmitry Rybolovlev in 2013 for a price reported to be about $150 million.

Whoever said money can’t buy happiness? For iconic silver screen actor Marlon Brando, it bought him love, and a small island, too. Located in French Polynesia, in an area known as the Grandfather of Private Islands, is a region named Tetiaroa. Among these tropical atolls sits an island named Desire, owned by Brando himself.

The picturesque landscape isn’t hindered by man-made structures and it remains undeveloped in order to maintain its rugged sense of charm and adventure. With an estimated value of $7 million, the island comes with another huge perk.

Johnny Depp has his own private getaway and it’s the island next to actor Nicholas Cage’s, called Little Halls Pond Cay in the beautiful Bahamas.

Inspired by this tropical area while filming the famed Pirates of the Caribbean, this $3.6 million piece of paradise hosts six private beaches which the legendary actor named after people he loves.

This next star made a titanic purchase for $1.75 million dollars when he bought an island in the crystal-blue waters of Belize. The secluded sanctuary is 105 acres and is located near the legendary Barrier Reef; here DiCaprio capitalizes on what he is most passionate about— the environment.

Gibson went through grave efforts to stake his claim and revamp the region, while giving the island a more modern and sophisticated look and feel. For $15 million dollars the Hollywood star has left a large portion of his paradise untouched, save for the modest home in the center of a sprawling golf course.

8. Undisclosed Islands off the Coast of Portugal

It makes sense that the director of Jurassic Park would own two mysterious islands nestled among a group of volcanic outcrops. Off the coast of Portugal near the Madeira Archipelago, lie two islands that are melded into one through an underwater connection.

9. The Island of Lanai

Billionaire Lawrence J. Ellison topped the charts for most impressive buys when he bought nearly all of the Hawaiian island Lanai in 2012. The owner of the technology and software company Oracle purchased the region for a reported $300 million dollars.

Two identical twins and British Billionaire’s David and Frederick Barclay are known to be fiercely protective of their private lives. When they bought a remote island getaway in 1993.

The billionaire co-founder of Red Bull purchased the Fijian island from the estate of Malcom Forbes in the early 2000s; since he has rendered the sanctuary a tropical hideaway with unbeatable levels of sophistication and privacy. .

The pristine piece of paradise is protected under a conservation easement with the Nature Conservancy, yet today the property has a sales tag of $23.8 million dollars, as Turner hopes another family can enjoy the natural oasis as much as his own loved ones have.

Purchased for $200,000 dollars in the 1970s, today, Sir Richard Branson— highly influential investor and philanthropist— rents his British Virgin Islands out for a hefty $62,000 dollars per night. The entrepreneur for over 40 business in the Virgin group.

The mind-blowing magician has it all, wealth, fame, and a whole string of islands in the Bahamas. David Copperfield purchased the quartet of atolls.