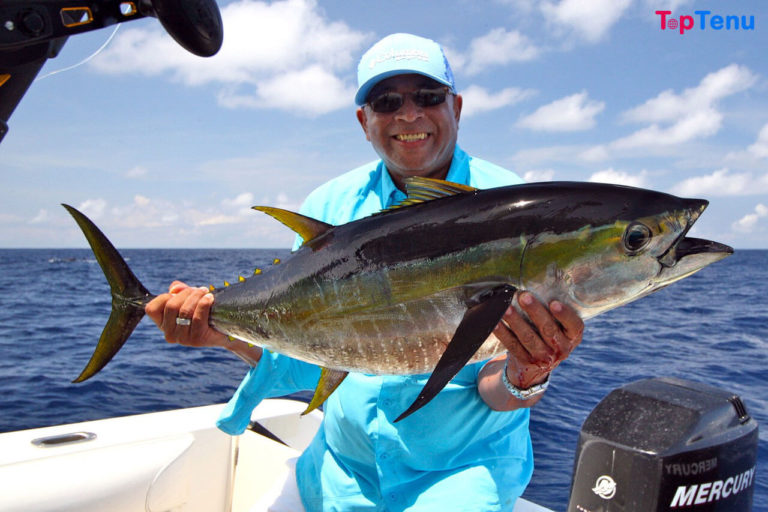 See the world’s 8 fastest swimming sea creatures &  other fish at top speed such as the blue marlin, yellowfin tuna, sharks, dolphins, and whales.

The yellowfin tuna is a species of tuna that usually lives in tropical and subtropical oceans worldwide, and is generally found in deep offshore waters. It’s one of the larger species of tuna, reaching weights over 400 lb, but is smaller than the Pacific and Atlantic bluefin tunas, which can grow up 1000 lb.

Pilot whales are closely related to dolphins, and they exhibit advanced intelligence and social skills. There are two species of pilot whales: shortfinned and long-finned. Although they are not distinguishable at sea, there are some differences between the two.

Long-finned pilot whales prefer slightly cooler waters, and are divided into populations found in the Southern Ocean and the North Atlantic Ocean or the Mediterranean Sea.

The short-finned pilot whales live in temperate and tropical waters, and they are found in the Indian, Atlantic and Pacific Oceans. Both feed primarily on squid, octopus, cuttlefish and other fish like Atlantic cod, Atlantic herring, and Atlantic mackerel.

Mako sharks, also known as blue pointers or bonito sharks, may be found in waters all over the world. They are adapt to survive in cold water, but inhabit all temperate waters, with larger concentrations in the Atlantic, Pacific and Indian oceans — and also in the Mediterranean and Red Sea.

Both short-fin and long-fin mako sharks are fast swimmers, but the short-fin mako shark is on record as the fastest-swimming shark, reaching up to 46 MPH 46 mph when executing bursts of speed.

This occurs when they are hunting or when they feel threatened. Short-fin mako sharks measure an average 10 feet in length and weighs anywhere from 100 to 300 pounds.

Related: 6 Most Scary Sea Creatures in the World

Bonefish usually live in tropical and subtropical shallow waters, and can be found throughout the Caribbean Sea, from Hawaii to Peru, to San Francisco Bay in the Pacific. They have an elongated body, with silver skin and dusky, yellow, pectoral fins. They can weigh up to 19 lb and grow up to 35 in long.

Barracudas are snake-looking-like fish that live in saltwater, in tropical and subtropical oceans worldwide, ranging from the Atlantic Ocean, to the Red Sea and Caribbean Sea. They usually swim near the top of the water and near coral reefs and sea grasses.

The dolphinfish, also known as mahi-mahi, is found in off-shore temperate, tropical and subtropical waters worldwide. It has a compressed body with a single long-based dorsal fin which extends from the head almost to the tail. Its skin is vividly colored with bright blues and greens and golden on the sides and back.

The mahi-mahi is easy to recognize by its iridescent blue pectoral fins. Its name, mahi-mahi, comes from Hawaiian word mahi which means very strong. Specimens can reach up to 3.2 ft in length and weigh an average 29 lb. They have a lifespan of maximum five years, but they rarely exceed four. Mahi-mahi are among the fastest animal in the ocean, reaching up to 57.5 mph while swimming.

The swordfish is recognizable by its long, sword-like bill, and its elongated body. It is usually found in tropical and temperate waters of the Atlantic, Indian and Pacific Oceans, and usually swim near the surface of the water, to a depth of 1,800 ft. Swordfish usually reach an average 9.8 ft in length, with a reported maximum of 14.9 ft.

Despite being a large fish and weighing up to 1,430 lb, members of this species may reach a swimming speed of up to 60 mph. They use their speed and agility in water in order to catch the prey and injure it with their bill, in order to make for an easier catch.

They feed on other fish such as herring, silver hake, barracudas, rockfish, mackerel or lanternfish, but might also take crustaceans, squid or fish.

The blue marlin is member of a group of predatory fish that live in all oceans, in temperate waters, and although there is a superficial resemblance to the swordfish, they are from different families. The species is also characterized by prominent spear-like snouts, or bills, as the name may suggest.

Another distinctive feature is a long rigid dorsal fin, which can extend to form a crest. Some specimens are known for being longer than 13 ft and can weigh up to 1800 lb. However, the blue marlin is best known for being the fastest fish known to man.

It can grow up to 7 ft in length and weigh approximately 260 pounds, with an average speed of about 68 miles per hour. Also known as Billfish, they usually swim in at the surface of the ocean, sticking to the top levels of the water.