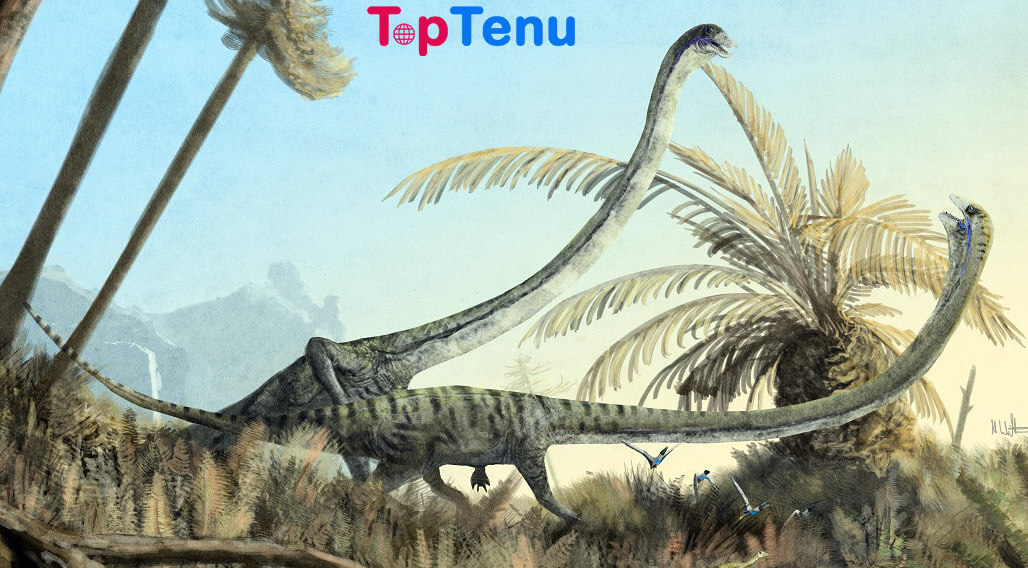 From a 1200 pound ape to a bird the size of a small plane, Today we look at Top 10 Strange and Weird Animal in the World that are Extinct.

Top 10 Weird Animal in the World

You might think that megalodon is the fabrication of a B horror movie but this aquatic super-predator actually existed. The megalodon was a massive shark that lived approximately 2.6 million years ago.

These beasts could reach proportions that were triple that of its modern day relative, the Great White. They were believed to have been between 40 and 52 feet long but some speculate that they could grow up to almost 60 feet in length.

Being one of the biggest carnivores in the ocean during its life it probably had the pick of its prey. It’s believed they hunted everything from giant sea turtles, seals and dolphins to the occasional meal of small whales.

The teeth were so large and strange to ancient civilizations who happened to find the fossils that they became part of mythology. Some ancient peoples believed that they were the tongues of dragons, while some thought they were stones that fell to earth from the moon.

‘It’s a bird…it’s a plane…no wait! That is a bird!’ is something you might have exclaimed if you lived in the time of Argentavis magnificens.

Also known as the Giant Teratorn, this prehistoric bird ruled the skies above the Americas approximately 6 million years ago.

Argentavis would have been a jaw-dropping sight, being the size of small airplane with a wingspan that could reach almost 20 ft and an average weight of 150 pounds.

In comparison the largest bird today, the California Condor, weighs only 25 pounds and has half the wingspan. Because of its massive size scientists believe that it most likely had to launch itself from higher ground in order to fly.

Once it was in the air it could reach speeds of up to 44 miles per hour and travel hundreds of miles without flapping its wings. Combining these attributes with its powerful hook-tipped beak made Argentavis a formidable predator.

Their diet probably wasn’t restricted to just what they could catch as many believe that like the Condor, they were also scavengers.

The fossils of the Argentavis may have been part of the inspiration for the Central and North American myths about Quetzalcoatl or Thunderbirds.

The semi-aquatic reptile that was tanystropheus look like what you would get if you crossed a snake with an iguana albeit greater in size than a saltwater crocodile.

Tanystropheus lived in the late Triassic period about 215 million years ago and was an average of 20 feet long with a weight of around 300 pounds.

What made this creature unique was the fact that its neck was longer than that of the combined length of its tail and body.

It is believed that the extremely stretched out neck was the evolutionary product of its diet that consisted mostly of fish.

Tanystropheus was believed to hang out on the shorelines, stick its long neck into the water and like a fishing line snatch fishes that came innocently swimming by.

Because of the ridiculous length of its neck, when it was first discovered paleontologists thought it was a flying pterosaur and the neck was its tail.

The record for the biggest ape to walk the Earth doesn’t go to your backwoods cousin Ed, no it belongs Gigantopithecus.

Weighing in at an average of 1200 pounds with a height of over 9 feet when standing, this extinct relative of the orangutan could have easily dunked on Shaq.

Gigantopithecus is believed to have lived somewhere between 100,000 and 9 million years ago and was almost twice the size of the Eastern Gorilla, the biggest ape alive today.

It mainly dwelled in the bamboo forests of Asia and is thought to have been a herbivore though it may have also dined on insects like many modern apes.

Its size may have been more of a curse than a blessing in the long run as bigger animals need more food to survive and when the climate began to change because of the Pleistocene ice age, their habitat changed from a lush salad-filled forest to that of a food-deficient grassland leading to their inevitable extinction.

However, some conspiracy theorists believe that their might be a link between gigantopithecus and the legendary yeti.

As recent as 1.8 million years ago the frightening Phorusrhacids, better known as terror birds burned up the cenozoic landscape with the ability to reach speeds of up to 30 miles per hour.

These flightless birds would’ve dwarfed humans with an average height of 8 feet with some unconfirmed species being even taller. Their middle toe was about the size of man’s hand.

So far the terrorbirds have only been known to have lived in North and South America, where they were the scourge of less-equipped creatures great and small.

Because of their serrated beaks, paleontologists believe that they were carnivorous and had the ability to take down prey as large as horses.

Terrorbirds may have been one of the apex predators of their lifetime until they were overtaken by saber-tooth tigers and dire wolves at the end of their reign.

Also Read: Top 10 Animals that are on the Verge of Extinction

If you were to give this next creature a voice of a cartoon one could imagine it sounding fairly dopey like that of Goofy. With four-tusks and and awkwardly protruding jaw the Platybelodon might have been the butt of many jokes during the Miocene epoch.

Even today the genus of this ancestor of the modern day elephant bares the offensive sounding nickname of “shovel-tuskers”.

But this shovel-like feature was incredibly useful to platybelodon as they probably used them like a sickle to hack at the branches of trees while holding them with their trunks.

They could have also possibly been used to scrape the bark off trees in order to get to the nourishing goodness waiting inside, while others believe it had a more shovel-like function enabling them to scoop up nutrient-rich vegetation in swamp-water.

Platybelodon lived throughout Africa and into Eurasia and was about the same height of the Asian elephant around 9 feet tall yet weighed slightly less at around 4,000 pounds.

Sadly, around 10 million years ago this poor spoon-faced elephant was yet another species to go extinct due to changes in the Earth’s climate.

Helicoprion was a prehistoric water-dwelling villain with a shark-like appearance, and though it was considerably smaller than megalodon with an average length of 35 feet it had a much more menacing appearance.

Helicoprion was initially thought to be a relative of sharks but was later determined to be part of the genus Chimaera, being related to the modern day cartilaginous elephant-fish.

What makes this fish, which lived approximately 250 million years ago, so terrifying is the fact that it had a row of vertically pointed teeth on its lower jaw that curved downward like that of a buzzsaw.

The stuff of nightmares for people today, Helicoprion was an actual nightmare for the poor creatures it feasted on. It used its circular saw jaw, known as a whorl, to snatch its prey and rotate the whorl backwards shoving these meals into its gullet.

Also Read: Top 10 Most Intelligent Animals in the World

If you have ever driven through the southern United States you may have noticed the all-too familiar sight that is expired armadillos on the side of the road, innocent victims to hit-and -runs.

If only these armadillos could call upon their ancestor, the Glyptodon, to exact some revenge and make humans know how it feels.

You see, if you hit a Glyptodon while rolling down the highway you would probably be the one cast into the nearby ditch as they weighed over 4,000 pounds and were over 10 feet long, which is only two feet shorter yet 1,000 pounds heavier than a Mini Cooper.

Unfortunately for armadillos, the Glyptodon went extinct about 11,000 years ago. These docile herbivores dwelled in North and South America and suspiciously disappeared around the time that humans first arrived in the area.

Scientists believe that because of man’s intelligence they were able to side-step the Glyptodon’s armored security system and expose the animal’s soft underbelly, which would have been prime eating meat.

Their shells could have also been a prime material for building shelter. Which is where the word shell-ter comes from..but not really.

If you think the modern day giant serpents boa constrictor and anaconda are petrifying then be glad that you didn’t live when their colossal ancestor, Titanoboa slithered through the South American swamplands.

Titanoboa lived in the Paleocene Epoch, which started about 65 million years ago just after the extinction of the dinosaurs.

The sheer size of this snake, with an average length of 50 feet and weighing over 2,000 pounds, can be attributed to the disappearance of these other gigantic reptiles.

Because dinosaurs were no longer around to compete for food and living space, snakes and other creatures began to grow in girth.

One would think being related to the modern day boa constrictor that Titanoboa dispatched its prey through constriction the reality was probably much more violent.

Scientists believe that Titanoboa would lurk partially submerged in water near the shoreline of rivers and lakes and wait for its prey to get close, then spring forth and use its gigantic mouth to crush its victim’s throat, similar to the way crocodiles do it.

It is also believed that one of their regular meals might have came in the form of the Elephant’s smaller snub-nosed ancestor Moeritherium.

The gophers that live today are already weird with their buck-teeth and mannic mannerisms, but if you lived about 5 million years ago you would’ve probably shot milk out of your nose laughing at their ancestors, the Horned Gopher.

Adorned with bifurcated horns atop their fuzzy heads, the Horned Gopher (known scientifically as Ceratogaulus) was an odd-looking creature indeed.

As the only horned rodent ever discovered, the Horned Gopher lived primarily in the forests of North America and were slightly larger than their modern day relatives, growing to about one foot in length and weighing around three and a half pounds.

Scientists were extremely perplexed by their horns at first as they weren’t in-line with the type of horns used for digging and probably weren’t a factor in attracting mates (as in some horned creatures) as they were present in both males and females.

The only logical conclusion that scientists could come up with was that the horns were used to intimidate predators.

The plant-munching horned gopher no doubt had a multitude of foes trying to devour it, as it lived in a period in which a vicious beardog, Amphicyon, was prowling about.

The pterosaur, Quetzalcoatlus looks like an animal right out of the world of Jim Henson. It had an incredibly long neck that stretched like that of a giraffe and a wingspan upwards of 45 feet making it the largest flying creature to ever live.

It had a powerful crested beak and hand-like appendages that stuck out from its wings. It is believed that Quetzalcoatlus used these hands like front feet when on the ground and used all four limbs to gallop in order to gain velocity for flight.

There are two prevailing theories on its feeding habits, some believe that it was a scavenger similar to that of storks or vultures, feeding on the occasional carrion while also hunting ground animals and fish from ponds while others believe that it hunted using a skimming technique, scooping up fish from the water mid-flight like a pelican.