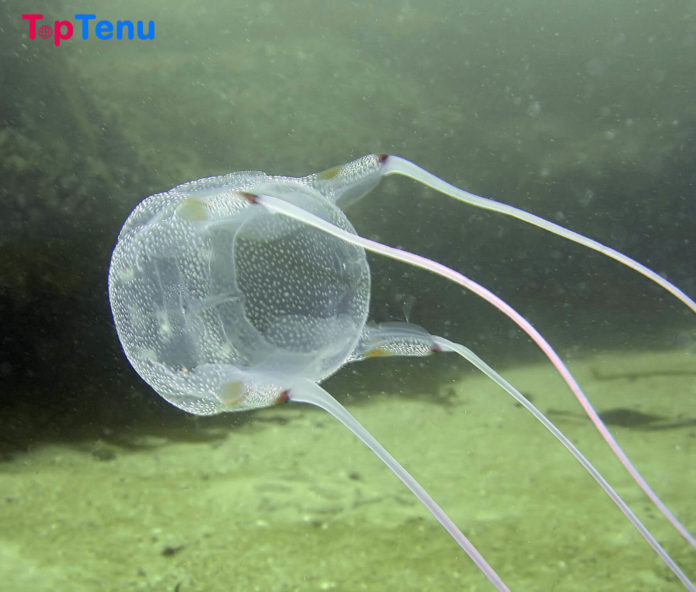 Top 10 Most Poisonous Fish in the World

The Puffer Fish or the Box Jellyfish are among the most poisonous fish in the world. Let’s take a look and see how to stay safe!

At number 10, we have the stingray which, just like its name, is notoriously known for stinging its potential harmers. The Stingray has stingers in its tail that have poisonous glands on their underside that can cause swelling with pain and bacterial infection on human victims.

These stingers can grow to a maximum length of 35 cm only, but are dangerous enough for divers and bathers in areas where they breed. This fish type is however not known for any fatalities.

It feeds on crustaceans and other small fish and mainly settles at the sea bottom when feeding. Stingrays are mostly found in tropical and subtropical coasts and are not known to attack humans unless provoked.

After the stingray, the Weever fish follows at 37cm as number 9 in our list. Well, pretty small this one, you may say, but the weever is one of the most poisonous fish you’ll probably come across if you are not lucky and its effects on your body won’t be pleasing.

This type of fish is mainly found in the Mediterranean, the United Kingdom, Ireland and Atlantic coasts of some European countries. It mostly attacks by biting the feet or hands of human victims when bathing in shallow waters.

Their bites are characterized by itching and swelling, and these are just but the most pronounced of all the symptoms caused by these fish. Other symptoms include lightheadedness and tremors.

Moving on to number 8 we have the clownfish which is basically a small fish that can grow up to about 15-16 cm in length. They are mainly found warm places like in the Indian Ocean and are omnivores in nature.This genre of fish feeds on zooplanktons mainly and can survive in the most poisonous and toxic of environments.

Related: 11 Most Invasive Aquatic Species in the World

The scorpion fish is not an exemption and comes at number 7 in our countdown with so much to contribute in this list. First of all, this fish contains spines that are covered in mucus toxins that inflict a lot of pain to human victims who are unlucky enough to have an encounter with them and to certain animals.

This type of fish is known for its tactical hunting techniques where it first blends with the environment then pounces on the unsuspecting prey so fast, swallowing it whole. It mainly hunts at night and is known to feed on small fish and crustaceans in the reefs.

The Giant Moray is a type of eel that can grow up to 3 meters in size and weigh up to 30 kg in weight, and hence its name. Coming at number 6, the Giant Moray is a very poisonous fish if consumed and can cause serious illness to the victim or sometimes even .

The yellow boxfish comes at number five and is of course a force to be reckoned with under the waters. Its suggestive name indeed shows that it has a box-shape and a bright yellow color, but during its glory days. This color fades with age and an old boxfish can be blue-greyish, all the bright yellow having vanished almost entirely.

At number four is the deadly lionfish, mostly found in the Indian and west pacific waters and is definitely one of the top four most poisonous fish in the world. The lionfish weighs about 0.025-1.3 kg and its length varies from 5 cm-45 cm. These species, just like the clownfish are known to be very attractive and mostly lure their prey, like the clownfish, to their snares and get food.

Related: 7 Most Sociable Sea Creatures in the World

Mainly found in the warm waters of the tropics, the puffer fish is undisputedly a top three as one of the world’s most poisonous fish. This fish can grow up to 90 – 100 cm in length and inflates with air and water when provoked. Despite their highly toxic nature, the puffer fish are also eaten in some parts of Japan China and Korea where chefs eliminate the poisonous parts serving the rest of the fish as a delicacy!

It is indeed one of the most dangerous fish you will in encounter in the Indo-pacific. Coming at number two, the stone fish is known to sting swimmers who sometimes step on them obliviously, as this type tends to camouflage with the environment and look just like a normal stone in the sea.

These species can grow to a length of 30-40 cm and weigh up to 2 kgs. They are very fast in attacking their prey and use their camouflaging skills in launching the attacks to their unaware targets.

And finally, at the very top of our list, comes this sea monster, the box jellyfish, which is not a threat because of its size really, but its highly poisonous nature. It is undisputedly the most poisonous fish in the water.