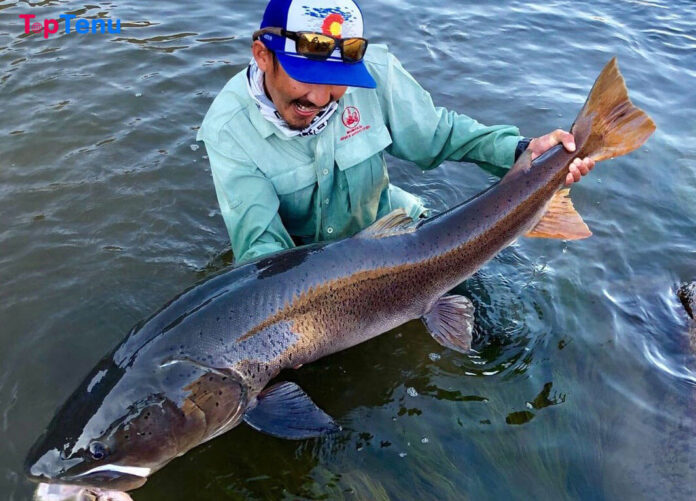 From the 23-foot-long sawfish to the 7,000-pound beluga sturgeon—beware— these 10 freshwater creatures call rivers and lakes their home.

These beauties resemble their close relatives the Barramundi, as both look like trout with their incandescent scales of shimmery brown and green.

They can reach up to 6 feet long and weight up to 500 pounds, and if that weren’t enough to scare swimmers away, just know the Nile perch is a highly aggressive species of hunter.

Even bigger than the Nile perch is the taimen. Also known as the Siberian giant trout and Siberian salmon, these members of the salmonid family are the biggest of their kind, growing up to 7 feet long and weighing in at a whopping 230 pounds.

These freshwater fish are found in rivers around Mongolia and Russia and can live up to 50 years.

Despite its massive length of 7 feet long and a scale reading of 200 pounds, the paddlefish is nothing to be feared. These gentle giants are big but harmless, meandering throughout rivers in the Mississippi Valley and Gulf slope drainages around North America.

The arapaima is a monstrosity of a creature which can be found in the Amazon River basin of South America, reaching up to 9 feet long with a weight of 440 pounds.

Even more impressive is that these scaly sensations breathe air and must surface every 10 to 20 minutes to take in a heaping gulp with which to satisfy their size.

This anomaly is found stalking streams around Central and North America, and the species are known to challenge sizes up to 10 feet with a weight of 300 pounds.

If size weren’t intimating alone, their appearance seals the deal, as alligator gars are known for the hideously long mouths teeming with teeth.

Also known as the Zambezi shark, these marine monsters reach up to 12 feet long and can weigh over 500 pounds; and what’s more, they like to gnaw on humans, but only a little. Bull sharks are one of the few species of shark known to provoke attack upon humans on purpose.

Those caught have been found to reach up to 23 feet long. Sadly, the population has taken a strong nosedive, as these critters all too often get caught up in fishing nets. Rather than take the time to tangle them free, fishermen merely kill the creatures.

Those found in the trans-boundary river of southeast Asia can reach lengths of up to 10 feet long with a weight of 600 pounds! Here, these varieties of catfish are known as the giant devil catfish, or goonch, and are overfished and endangered due to the fact that they taste so dang good.

These bottom-dwelling beauties reach up to 10 feet long and weigh up to 1,300 pounds, despite local claims that they’ve seen much bigger.

Thailand currently holds the world record for the biggest stingray ever seen, thanks to a massive mother found pregnant with two fetuses in the Meh Khlong River. With a length reaching an easy 14 feet long and a diameter of 8 feet across— her size of 800 pounds.

These massive monsters can reach lengths of 15 feet long with a weight of up to 2,500 pounds— in fact, the largest ever recorded critter weighed a whopping 7000 pounds. They can live up to 100 years which makes sense, as these beauties have been around since prehistoric times.