From out of nowhere as well as unexplainable sounds and creepy, underwater crop circles. Below are a few solved and unsolved ocean mysteries that make our oceans one of the most respected, and feared forces on earth.

A milky white sea? This phenomenon refers to the unique milky glow of the waters of the Indian Ocean. When bioluminescent bacteria begin to populate the result is a bluish hue in the sea, which appears to the naked eye as a milky white color against the darkness of the water. For over four centuries the Milky Sea phenomenon has been documented to be in existence!

This awe-inspiring wonder is a result of light being produced by hundreds of tiny bioluminescent marine creatures. The light show is a defense mechanism when the organism becomes stressed or fearful, and the reaction is certain chemicals in their body counteracting with atmospheric oxygen.

3. The convergence of Baltic and the North Sea

This next one is a highly debated topic among the scientific community. For example, the convergent point of the North and the Baltic Seas occur in the province of Skagen in Denmark. Here, there are different rates of densities of the seas’ waters so both continue to remain separate despite their convergence.

Known as the ‘sea smoke’, the steam rising out of the Black Sea is due to the humidity of the oceanic water counteracting with the coolness of the wind over the water’s surface. Apart from explaining the ocean mystery behind the steam rising from the Black Sea, experts have also proved that the phenomenon is quite common to even smaller water bodies of water.

Here the seas foam in an endemic of nature known as ‘sea foaming.’ The foaming of the seas is caused by the disturbance to the organisms present on the water surface due to the constant tidal action. Alternatively, in certain cases, seafoam can also be caused due to disturbances caused by human activities; for example, dispelling of toxic waste into our oceans!

Sailors crossing the seven seas were often delirious after months of being away from land. So much so that their eyes would often play tricks on them, causing them to see all sorts of phenomenon that didn’t exist. This natural occurrence is as real as it gets, however, and it’s known as the green flash. the green flash.

The occurrence of red tide is technically known as ‘Algal Blooming’ by scientists. The ocean phenomenon occurs when there is rapid growth or blooming of algae in the oceanic waters increases rapidly, according to time of the year and season. When large contraptions of tiny sea life mix with nutrients on the seafloor, the upwelling along with massive storms results provide for the algae and trigger bloom events.

A team of diving experts swam upon this discovery in 2011. Known as the Baltic Sea Anomaly, the team found a 60-meter thick circular entity at a depth of 90 meters in the Baltic Sea. Curiosity rose as they found a track that seemed to lead towards the entrance, which the divers measured to be around 300 meters.

In 1997, a mysterious underwater recording captured the heart of conspiracy theorists around the world. When a team of scientists was searching for underwater volcanoes off the coast of South America, hydrophones more than three thousand miles apart all captured the same inexplicable sound. Seemingly from the depths of the ocean came a recording no one could seem to explain, except that it was a strange and exceptionally loud noise which soon became known as “the bloop.”

8 Terrifying Worms and Parasites Living in the Water

14 Most Immediate Threats To Our Oceans

15 Astounding Finds Uncovered at the Bottom of the Ocean 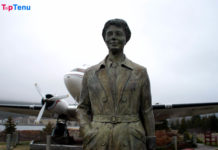 7 Flights that Went Missing in the Ocean