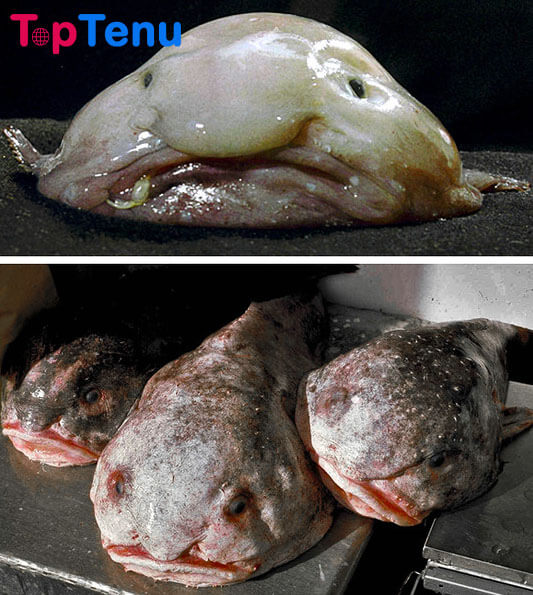 10 Scary Sea Creatures in the World

2/3 of marine life is undiscovered. The blobfish, goblin shark or fangtooth are some of the craziest creatures found in the ocean.

Starting at the top of our list of craziest creatures found in the ocean is the rattail fish, known for its large eyes and mouth and a rat-like tail responsible for its name.

The Grenadier, as it is otherwise known, is a small fish that grows to a maximum length of 1.5 meters, with some smaller species growing up to 10 centimeters.

This family is so large that it makes up to 15% of the sea’s animal population. Found in depth ranges of 200-7000 meters, these fish swim in schools, especially round nose grenadiers which spend the winter in shallow waters and the summer in the deep oceans.

Yes, you are absolutely right. This crazy sea creature looks exactly like cucumbers with their almost cylindrical shape and leathery skin. Coming at number nine, the sea cucumbers are small animals that grow within the range of 10-30 centimeters in length with very many species all across the world.

Their length varies with different species, with some growing to lengths of 3 meters and the largest having volumes of up to 500 cubic centimeters.

At number 3, the dragon fish is indeed a strange creature of the sea, and TRULY a dragon of the deep sea, and its special characteristics explain it all.

From its strange appearance and adaptations, the fish is able to survive in the deep seas of up to 1500-4500 meters, and in some cases 5000 meters below the water surface.

At these depths, the pressure is crushing and the temperatures go up to -4 degree Celsius. Chances of survival are slim. For the species though, its special adaptations which include a minimal skeleton in its entire body, having jaws with which it uses to feed are enough for survival.

Living in depths of up to 1700 meters, the Black Scabbardfish makes it to number 4 as one of the strangest creatures that lives in water. To begin with, this species has an elongated body with a snout that contains strong fang-like teeth that help it feed on crustaceans, cephalopods, teleost and mesopelagic fish.

This shape is important for swift swimming in the sea which helps facilitate catching of prey or escape from a potential predator.

Pushing our list to number 5, the fangtooth stands unshaken and its appearance says it all. That is one weird creature found in the ocean. First of all, the fangtooths have large disproportionate fang-like teeth, just like their suggestive name, rooted in their large jaws.

They are one of the strangest animals lurking below the sea, and their characteristic appearance is so distinctive.

At number 6 in our list of craziest creatures found in the ocean we have the Marine Hatchetfish is one of the species of about 45 that exist in the world, among them the freshwater hatchetfish mostly kept in aquariums in some homes.

Their name originates from their hatchet-like shape with very thin bodies that almost resemble the blade of a hatchet.

Let’s move on to the next crazy creature of the seas. From the oval green eyes to its long cigar-shaped body and a round snout, the cookiecutter is indisputably one of the most bizarre sea creatures in the entire world. Coming at number 7, this species is chocolate brown in color with a darker region around its neck that resembles a collar.

Also known as chimeras, these crazy sea creatures are definitely a top 8 on our list due to their very bizarre appearance. Their name explains it all. The Ghost sharks are long soft-bodied fish that grow to lengths of 4 meters with exemptions of longer tails in some species.

At number 9, the Goblin shark is probably the scariest fish you can ever come across. It’s almost the craziest creature found in water. From its long blade-like snout to its nail-like teeth rooted in a protruding jaw, it’s truly a wonder of the sea.

It can grow to lengths of 3 and 4 meters, with the larger ones going to lengths of 5.4- 6 meters and weighing up to 210 kilograms.

And finally, summing up our list is the fish that has been branded the ugliest in the world. The ugliest and now, the craziest creature found in the ocean:

The Blobfish. Its popularity was propelled by the sad expression on its face and its almost unreactive nature to its environment.

That was it for our list of craziest creatures found in the ocean. If you have any other suggestions of crazy, weird, strange or bizarre creatures that live in the ocean or water, let us know in the comments below.