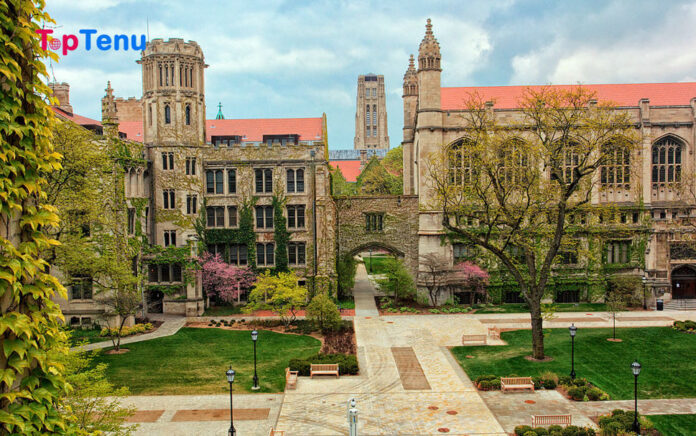 10 Most Prestigious Universities in the World

10. The University of Chicago

Number ten on our list is the University of Chicago, located in the windy city of the United States. This is one of the newest colleges on the list, having only been founded in the 1890s.

Still quite a while ago, but a baby in terms of the others we’re going to look at today. It may be in it’s adolescence in terms of age but the University of Chicago is certainly not acting it’s age.

Consider it the ‘Sheldon Cooper’ of the University world, starting young but advancing fast. It was the first major research university to not require SAT/ACT scores from college applicants and is a national leader in its higher education curriculum.

It’s current focus is on developing an innovative UG education program. The University of Chicago, often known as the U of C, is home to a world class research center, a student to faculty ration of 5:1, and a six percent rate of acceptance.

For number nine on our list we are hoping across the pond to rainy England; the home of Shakespeare, the Queen and the classic cup of tea. And speaking of classics, its time to look at one of the most prestigious universities of classic education.

It is the Imperial College London. Don’t be fooled by the name, this is a university. And not only that, it is a public research university in London, England.

Imperial College London is known for having grown from Prince Albert’s vision of an area of culture.This is the only university in the United Kingdom that focuses exclusively on medicine, science, business, and engineering.

Related: Top 10 Most Beautiful Pigeons in the World

Consistently placed at number eight from year to year is Yale University – the second private research university on our list. Yale is known for being one of the best law schools globally. One in five students are international.

It is the second richest institute in the world and boasts the third largest library in the country. Yale University was founded in 1701 and has been the receiver of long running positive feedback in its curriculum.

It is one of nine Colonial Colleges chartered before the American Revolution, originally baring the name Collegiate School. It has a six percent acceptance rate.

At number seven on our list, we find Princeton University, located in the United States. Princeton is regarded as one of the most illustrious higher education institutes. It’s a private institution, with a focus on offering financial aid packages and an expansive list of opportunities for undergraduate research.

Princeton is consistent in its placement on the ranking charts, and is part of the Ivy League colleges in the States. Princeton University is best known for its non-engineering based sciences and the WW school.

It only has a six percent acceptance rate, making it match it’s regal name. And the academic royalty doesn’t end at the name. Princeton boasts some very prestigious past members. Jeff Bezos and Michelle Obama are among well known alumni to this university.

The Massachusetts Institute of Technology is our sixth most prestigious university in the world. It’s more commonly known as MIT and has held this position on the charts for six years. It’s very prestigious in terms of academics and its research into engineering, science, and social sciences like Economics.

It’s located in Cambridge, Massachusetts, and is a land-grant, sea-grant, and space-grant university. Its campus expands a mile along the Charles River. It has a seven percent acceptance rate, and is best known for its endeavors in trying to further scientific advances I the twenty first century.

Its motto – Mens et Manus – stands for ‘Mind and Hand’ and is meant to emphasize the connecting point between academic endeavors and physical engineering. [BREAK] Enjоуing the vidео? Bе ѕurе tо subscribe and сliсk the bеll buttоn for instant notifications.

5. The University of Cambridge

Known around Europe as part of the ‘Oxbridge’ duo, the University of Cambridge has been calling out to the greats for centuries. It’s the second oldest university in the English-speaking world, and the fourth oldest surviving university worldwide.

And when did it open it’s doors? 1209. It grew from a group of scholars who left Oxford after a dispute with those in the town nearby, and has since become one of the most prestigious universities in the world. It has recently begun focusing on improving its accessibility to candidates.

CalTech boasts a prestigious and globally known science and engineering program. It’s the top of its field in theoretical research and a six percent acceptance rate.One of the traits it boasts is having a small student body, which allows for more personalized learning between the staff and those attending the university.

The institute was originally founded in 1891 under the name of Throop University. It didn’t become the California Institute of Technology until 1920. Their mascot is a beaver, which they state to be “nature’s engineer”, making it the second big engineering university on this list.

When you searched this video, this was probably one of the first places that came to mind, and for good reason. Famous in franchisee, movies and academic circles, it is Harvard University, which has climbed four places in ranking just since last year.

It is considered to be not only one of the most prestigious colleges in the world, but it also is known for being one of the eight private universities in the States that make up the Ivy League colleges. It was established in 1636 and is the oldest university in the United States.

Harvard University is connected to more than forty five Nobel laureates and thirty Heads of State.

Harvard University also has the highest financial endowment of any university in the world. And it was mentioned in big name movies like ‘Legally Blonde’, showing how it’s reputation is even strong in Hollywood!

on our list is Stanford University, located in California, America. This is a private research university, and is considered the most prestigious university in the United States. It has produced seventeen Nobel laureates, and is home to nearly seven hundred campus buildings.

Among notable alumni is Elon Musk, a well known business magnate and philanthropist. Stanford University is credited for being the cause of the rise of Silicone Valley, which is a global center for high technology and innovation.

1. The University of Oxford

located in England and making up the other half of that ‘Oxbridge’ duo. Oxford is a collegiate research university, and is one of the UK’s oldest universities, and one of the most well known universities world wide.

The university employs staff members from just under one hundred countries, and has roughly twenty thousand students. One of the most notable alumni is Stephen Hawking, a well-known theoretical physicist.

It’s presently at the forefront of research in the humanities on an international level. It’s also well known for it’s motto – Dominus Illuminatio Mea – which has been in use since the second half of the sixteenth century.