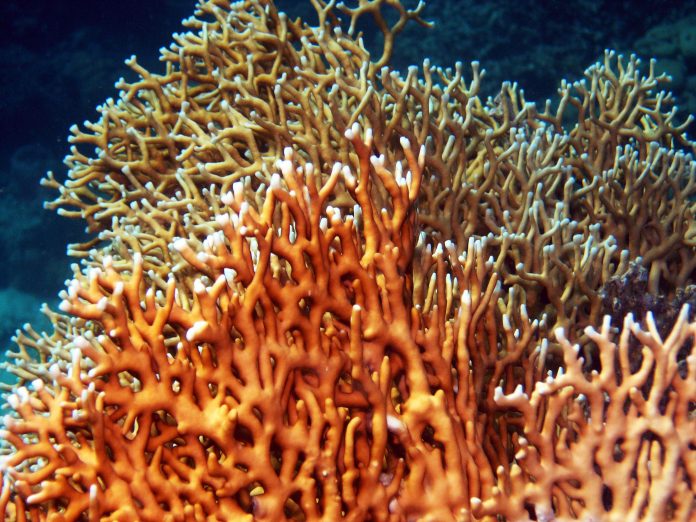 14 Most Poisonous Creatures of the Sea

Fire Coral is exactly what it sounds like; coral that will smack you down with a ferocious sting if you get too close. Although not technically coral,

Fire Corals fall into a class of hydrozoans, a group of animals that are closely related to corals and have pretty much the same appearance. Fire Corals come in all shapes and sizes, but what’s the same across the board are their bodies.

Fire Coral all have tough skeletons that contain many small pores. Each pore has a microscopic tentacle that can shoot out stinging poison if you brush against it. Snorkelers and divers beware!

Fire Coral may cause you horrible, burning pain if you accidentally swipe it on your way past.

Old Wife fish are named for the moaning sound that they make when they’re removed from the water, but that’s far from the only not-so-fun fact about these fish.

Old Wife fish also have venomous spines that can cause tremendous pain. Come in contact with their dorsal spines, and you can expect a nasty sting that will send you straight out of the water.

Although they don’t tend to be aggressive, Old Wife fish are easily spooked and will retaliate if they feel threatened, which is relatively easy to do given their expansive habitats. Old Wife fish live in seagrass, coastal reefs, and harbors and usually stay hidden until it’s too late.

While most Sea Urchins are benign, there are some that can be venomous as well, so it’s best to stay away from all of them if you want to remain safe.

As these little creatures are covered in spines, the biggest danger comes when one gets lodged in a person’s body, sparking an infection.

Even if the animals aren’t venomous, their spiny intrusions can still cause some major pain and suffering, as they can stay lodged in your skin for months.

To tack on another layer of problems, sometimes the spines migrate through your body, so it can be impossible to know where they are.

Like Sea Urchins, Sea Sponges can be benign or venomous, but the trouble is that you never fully know what you’re dealing with. Certain types of Sea Sponges have mildly toxic spines that can spark skin irritation and blistering if you accidentally rub against them.

While it’s generally more of an annoyance than a huge problem, Sea Sponges spark prickling, itching, and mild blistering that can get worse over time and can take up to a week to heal.

Usually, putting cold compresses on the Sea Sponge injury will ease the pain and allow you to operate normally while you heal.

Sea Anemones are not as dangerous as Jellyfish, but these floating animals can still cause you some trouble if you run across them on a coral reef.

Primarily located in tropical waters, Sea Anemones tend to drift around near coral reefs, landing on the rocks and causing issues for those who are swimming or snorkeling nearby. Like Jellyfish, Sea Anemones have venomous tentacles that they use to catch prey.

Although humans aren’t on their list, they will not hesitate to inflict a sting if one of us comes too close.

Although Stingrays are beautiful and often gentle, they can pose big problems for people in the water, namely because of their poisonous barbed tails.

As Steve Irwin tragically reminded us, Stingray venom is a terrible thing; a type of cardiotoxin that can stop your organs in their tracks.

Most of the time, humans run afoul of Stingrays when they accidentally step on them. Since these creatures like to bury themselves in the sand, it’s easy to have a chance encounter. Not all Stingrays are equally venomous either.

The Bluespotted Stingray has a much nastier poison tucked into its barbed tail. Cross paths with that one, and you can certainly expect to be hospitalized if you’re lucky.

The adorably named Striped Pyjama Squid is one of the deadliest cephalopods in the seven seas, and its sassy little pyjama outfit masks a dark secret; a lethal mix of toxins that will take out just about any predator on the planet, including humans.

The Striped Pyjama Squid’s cute white and black suit hides tiny glands that are simply bursting with poison and will explode if a predator- or accidental swimmer- brushes up against them.

Since Striped Pyjama Squid live near Australia’s Great Barrier Reef, they come into contact with snorkelers and swimmers quite often.

Watch out for them in the sand or hiding in different parts of the reef, and if you see this zebra-striped squid, stay far away!

Red Lionfish are both beautiful and deadly, and their gorgeous coloration hides a painful secret- their venomous spines. Get hit with one of those suckers, and you will be in a serious world of pain! Red Lionfish are capable of inflicting horrific puncture wounds that, while rarely fatal, are extremely painful.

Although Red Lionfish aren’t aggressive by nature, they will react defensively if disturbed, spreading out their fins and striking with their spines.

Red Lionfish are found mainly in the South Pacific, and these reef fish often come fin to face with local divers. If you get stung, be prepared for waves of nausea and high fevers until the poison leaves your body.

Realed: Top 5 Most Deadliest Sharks for Human in the World

Although it strongly resembles a jellyfish, the Portuguese Man-of-War is not one. It’s a siphonophore and is actually several animals mashed up into one.

Unfortunately, all of these animals have a hell of a sting! They look a lot like 18th-century Portuguese ships, which is where their name comes from, and the things are absolutely massive.

With 165-foot tentacles, these creatures have a long and painful reach deep below the waves, and every single inch of their tentacles are jammed full of venom, the better to catch and kill any marine life that gets in their way.

Although they’re not generally fatal to humans, if you tangle with a Portuguese Man-of-War, you can undoubtedly expect to deal with the repercussions, which typically amount to tremendous pain and swelling.

The Marbled Coneshell is one of nature’s greatest warnings to leave things well enough alone. Although they look beautiful, they’re highly dangerous and qualify as one of the most venomous marine animals on the planet.

Located in the Indian Ocean, Marbled Coneshells fight back against predators with a tiny harpoon-style proboscis that fills you to the brim with neurotoxins.

As ghastly as that sounds, these small creatures are not just hazardous to other animals.

They can prove fatal to humans too, and a single sting can be enough to paralyze your muscles and hurt your breathing. There’s no anti-venom, so the next time you see a lovely shell on the beach, remember that you could be gambling with your life!

If you’re swimming in the Pacific, keep your eyes peeled for Stonefish. These animals are experts at hiding and are often found in shallower areas and coral reefs, making them especially dangerous for snorkelers and divers.

Run afoul of one, and you could be dealing with a potent and deadly neurotoxin that the Stonefish deploys when it feels threatened.

This venom can stop your heart or paralyze you, which spells automatic death if you’re out in the open water. If you do get stung, you need to seek medical care immediately, as the venom can take down an adult human in less than one hour if not treated right away.

Pufferfish are not just one of the deadliest animals in the ocean; they are also a Japanese delicacy! These creatures contain tetrodotoxin, which shoots up immediately into your brain and can cause paralysis and death.

Get stung by a Pufferfish, and you’ll need to seek medical treatment right away, but outside of the water, you can find this feisty fish served up in five-star sushi restaurants where it’s known as Fugu.

Consuming a tiny amount of the poison is considered an apex culinary experience, but you certainly don’t want the total dose.

Box Jellyfish are lethal creatures that many people consider to be the most dangerous and venomous sea life in the world. Tangle with a Box Jellyfish, and you’ll only have a few minutes to live.

The lucky few that escape with their lives will bear the scars of their encounter for the rest of their days. Essentially, Box Jellyfish poison stops your heart, and if you’re swimming in the oceans, you could be in a very dangerous position.

You’ll find these creatures everywhere on the planet, but they’re most common in Southeast Asia. Collectively, Box Jellyfish are thought to be responsible for 6,000 human deaths.

Blue Ringed Octopuses are some of the deadliest animals in the world and also some of the smallest and cutest.

Native to the Pacific, the Blue Ringed Octopus mostly lives in shallow water and tidal pools near Japan and Australia.

It’s a tiny animal, barely bigger than a deck of playing cards, and it’s beautiful coloration and shallow habitat makes them particularly attractive- but when it comes to the Blue Ringed Octopus, it’s best to look and not touch unless you want to gamble with your life.

tiny creatures are bursting with tetrodotoxin, a neurotoxin that is 1,000 times deadlier than cyanide. A single Blue Ringed Octopus has enough venom to kill 26 people within a matter of minutes. To make matters worse, there’s no known antivenom.

Consider yourself warned! Would you rather go diving near a school of Box Jellyfish or share a tidal pool with a Blue Ringed Octopus? Let us know in the comments section below.