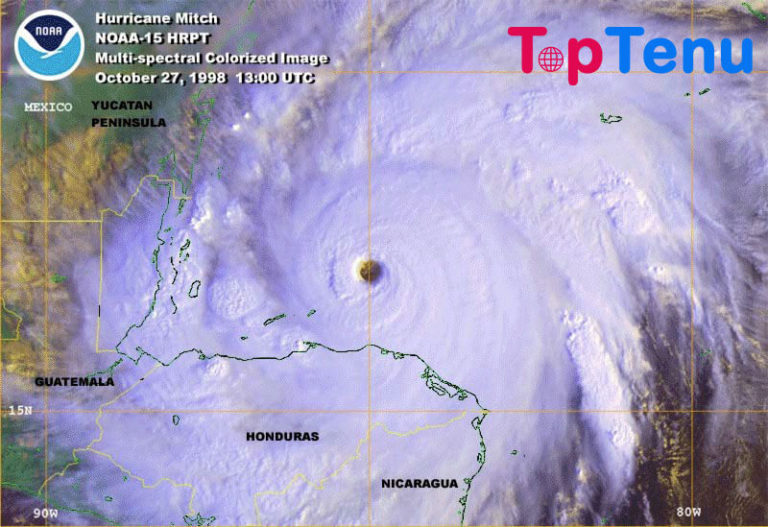 Hurricanes have been called the most destructive natural disaster on the planet, and history books can confirm their ruthless reputation since the dawn of time.Here are 10 of the most devastating hurricanes in history!

In August 2017, a seething tropical tempest traveled from the Gulf of Mexico with a vengeance known only to a Category 4 storm.

127 centimeters of rain was dumped down on Houston in the span of four days— roughly the same amount of water endured by the state in an entire year.

Consequences comprised the entire metropolis of Beaumont to suffer without fresh water for the duration of Harvey’s wrath; in addition, more than 13,000 victims required rescuing and 30,000 were displaced by the ferocious floodwaters.

The 2012 Hurricane Sandy was no sweet surprise to victims of the East coast, as for days they anticipated the destruction that had already pummeled through Jamaica, Cuba, and Haiti.

The Category 3 catastrophe left lower Manhattan submerged under water, with residents lacking power for several days due to storm tides thrusting upon the city at more than 13 feet.

Despite the nice name, Camille was particularly nasty— inviting heavy flooding and winds of 200 miles per hour to the Gulf Coast and later, Virginia. This 1969 hurricane was one of only three Category 5 hurricanes to strike the U.S. continent since 1900.

After forming near the Cayman Islands, she blew through Cuba as a Category 3 and soon intensified in her path of destruction toward the good-natured swamps of Mississippi.

Hurricane Gilbert stood out to meteorologists due to its massive size— spanning 500 miles in diameter. This earned the storm the brave accolade of largest hurricane ever observed in the Atlantic basin.

Beginning near the Cape Verde Islands on the west coast of Africa, Hurricane Gilbert originated in the birthplace of some of the worst hurricanes in history.This 1988 Category 5 storm covered the entire expanse of Jamaica and destroyed 80 percent of the island’s homes.

In 1935, a Category 5 storm brought 200 miles per hour winds to the Florida Keys, sending a downpour of soaking rain upon the region and killing approximately 400 people in its wake.

The Labor Day Hurricane earned the tag based on the time of year it struck since the practice of hurricane naming wouldn’t ensue for another 20 years.Said to be the strongest to hit the United States in the 20th century, more than half of its victims were World War I veterans,

Affecting the coast from central Florida to eastern Texas, Katrina claimed 1,833 lives and wracked up a bill of 161 billion dollars in what is considered the costliest hurricane in America. According to the Federal Emergency Management Agency, the tragedy was “the single most catastrophic natural disaster in U.S. history.”

On August 26th, 2005, Katrina appeared to be dissolving when she took a deadly turn for the worst. Growing to a Category 5 level over the warmer waters of the Gulf, mandatory evacuation orders were bellowed across New Orleans.

Hurricane Maria reached the tiny island of Dominica on September 18th, 2017, before setting off in another whirlwind denoting speeds of 175 miles per hour.

She ricocheted off Guadalupe and the U.S. Virgin Islands before seeking to destroy the island of Puerto Rico just two days later.Despite having weakened to a mere Category 4, Maria remained unyielding with 155 miles per hour winds and 10 inches of rainfall.

Related: 10 Most Dangerous Beaches in the World

While Katrina may have stolen the show for biggest price tag, she cannot claim the title of worst storm to ever hit the Gulf Coast. In September 1900, The Galveston Hurricane scoured the coastal community of Texas and took with it an estimated 6,000 to 12,000 lives.

The tropical swell didn’t manifest into a full hurricane until it passed just west of the Florida Keys, and in an uncalculated left turn, began a merciless march toward Galveston.

17,325 victims lost their lives, with thousands left missing, which rendered Mitch the second-deadliest storm to hit the Western Hemisphere in a span of 200 years. The tropical tempest raged over Nicaragua as well, losing 2,000 people in one devastating mudslide alone.

The United States was barely making a name for itself when the Great Hurricane of 1780 carved its way through the Caribbean, blasting the tropical terrain to shreds and killing approximately 22,000 residents.

With the ink still fresh on the Declaration of Independence and the Revolutionary War beginning to wind down, victims of the disaster included British and American soldiers commencing battle from various warships scattered amongst the region.