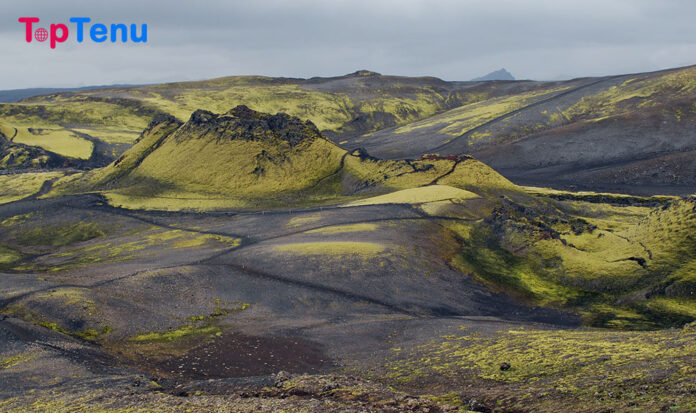 Located on the island of Sumbawa in Indonesia, Mount Tambora is a stratovolcano about 3,610 feet deep/ with a diameter of 3.7 miles. Stratovolcanoes are a bit different than regular volcanoes.

They have a cone-like shape due to the build up of several layers of hardened lava and tephra, or rock fragments, over time. They are the most dangerous type of volcano because they can erupt without much warning.

They are also more likely to have more explosive eruptions because of gas building up in the magma. In the year 1815, Mount Tambora erupted, making it known as the largest and deadliest volcanic eruption recorded in human history.

People were able to hear the explosion from 1,200 miles away on the island of Sumatra, and volcanic ash made its way across the waters between several neighboring Indonesian islands. Before the eruption, Mount Tambora stood at 14,100 feet tall, but the impact of the explosion shrunk it down to about 9,350 feet.

At least 71,000 people died in the eruption, but it is estimated that the death toll is even higher at around 100,000. Many more died over the next three years due to the consequences of the explosion.

The reason for this is that the equator runs through Indonesia, and volcanoes that are close to the equator have the potential to cause temporary global climate change if their eruptions are aggressive enough.

In the following years after the eruption, the Northern Hemisphere experienced widespread starvation due to crop failure and dying livestock.

Related:7 Most Expensive Pools in the World

White Island, also known as Whakaari, is a stratovolcano with an elevation of 1,053 feet, located in the Bay of Plenty off the northeast coast of New Zealand. Because of its volcanic activity, White Island is a pretty popular tourist attraction.

On December 9, 2019, a White Island tour that was sold by the Royal Caribbean cruise line took a tour group of 47 people to the island for the day, when suddenly, the volcano erupted. Twenty-two people died in the eruption, including two people whose bodies were never found and were later declared dead.

Some of the victims died on sight in the explosion, while others later died from their injuries in the hospital. The other twenty-five people all sustained injuries, mainly severe burns. One victim, Lisa Dallow, sustained severe burns to 60% of her body and was in a medically induced coma for almost 2 months.

When she woke up, she was devasted to learn the news that her husband, Gavin Dallow, and her 15-year-old daughter, Zoe Hosking, didn’t survive the eruption. Surviving victims planned to sue the Royal Caribbean cruise line for the incident.

Because there were indications weeks prior that the volcano was at risk of erupting, yet the cruise line sold tickets for the excursion anyway. A few weeks before the eruption, the Volcanic Alert Level, which warns for potential eruption, was at a Level 2—the highest level of a potential eruption.

Six days before the excursion, it was noted that debris and mud was thrown 65 to 98 feet in the air. If the cruise line had taken these signs seriously, perhaps all the lives lost/ could have been avoided.

With an elevation of about 17,400 feet, Nevado del Ruiz is a glacier covered stratovolcano found in the Andes Mountains of Colombia, about 80 miles west of the country’s capital, Bogota. In 1985, the volcano erupted.

And while it was a relatively small eruption, it subsequently triggered the formation of lahars, or heavy, violent volcanic debris and mudflow, to wreak havoc on nearby rivers and towns.

The lahars reached heights of almost 100 feet high—that’s the length of a blue whale standing upright—and rushed down from the volcano at around 19 miles per hour. Scary, right?

Mount Ontake is the second highest volcano in Japan that reaches over 10,000 feet high. It is a popular spot for hikers to get some exercise and take in the beautiful scenery with friends and family. However, tragedy struck on September 27, 2014.

The eruption was completely unexpected, as there weren’t any recent earthquakes to alert authorities of a possible eruption. So why did it erupt? A phreatic eruption took place, meaning that it was triggered by magma heating up the ground or surface water.

Since the temperature of magma is so high, it caused the water to evaporate almost instantly, resulting in a hydrothermal explosion. The unsuspecting hikers/ turned to make their way back down the mountain, but many of them got caught in the debris.

People witnessed their peers: buried alive by clouds of ash, asphyxiated by poisonous gas, or fatally hit by falling rocks. At least 63 people died on the mountain.

Sayuri Ogawa, a mountain guide, survived the eruption. She recounted her experience of choking on sulfur gases, how the ash turned everything pitch-black, and how she hid from falling rocks the size of cars and washing machines.

Although she said she thought she was going to die that day, that hasn’t stopped her from returning to Mount Ontake.

The 1783 Laki eruption was the deadliest eruption in the history of Iceland. Laki is actually a volcanic fissure, which is a linear chain of vents that lava erupts from.

The eruption lasted for about 8 months, starting on June 8, 1783, and ending on February 7, 1784. A phreatic eruption caused Laki’s 135 vents to pour out 3.7 quadrillion gallons of lava—more than the size of Lake Superior—over the 8 months.

The lava covered about 965 square miles of land—that’s bigger than the size of Tokyo, which is the largest city in the world at 847 square miles. Lava fountains reached up to 4,600 feet high.

An estimated 8 million tons of fluorine.And 120 million tons of sulfur dioxide polluted the air and poisoned: livestock, crops, and people. The compounds released into the air from the eruption caused acid rain.

If food and water weren’t protected from the volcanic ash, they would become poisonous to consume. Fish died in the ocean, crops were unable to grow, and half of the cattle and a quarter of the sheep and horses were killed.

More than 9,000 people, or one-fifth of Iceland’s population, died from illness and famine as a direct result of the eruption.

Related:14 Most Poisonous Creatures of the Sea

Mount Saint Helens is a stratovolcano located in the state of Washington. Its eruption on May 18, 1980, was considered the largest and most destructive volcanic eruption in the history of the United States.

A 5.1-magnitude earthquake caused a landslide of debris to reduce the elevation of the summit from 9,677 to 8,363 feet and left behind a one-mile-wide crater.

The energy released from the eruption was about the same as 1,500 atomic bombs, causing scalding gases and big rocks to eject from the volcano at speeds of up to 400 miles per hour.

The aggressive lahars destroyed: 200 homes, 47 bridges, 185 miles of highway, and killed a total of 57 people. Two survivors shared their story of how they were saved from the path of deadly volcanic mudflow.

Venus Dergan and Roald Reitan had been camping about 30 miles away from the mountain and had no idea that the volcano erupted or that they were directly in the path of a deadly lahar.

The young couple woke up to the sound of an evacuation alarm blaring from a nearby town, but didn’t know what it was for at the time. If they hadn’t gotten out of their tent when they did, they would have been buried alive by the raging lahar rushing towards them.

When they saw it making its way towards them, they quickly grabbed their belongings and got into their car. But their car wouldn’t start, and the mudflow and debris swept them up into the river, which was 4 times bigger than normal.

They scrambled onto the roof of the car and had fallen into the river. Luckily, they were both able to cling onto a log for dear life as they were swept down the river, until they were ultimately airlifted into a helicopter and rescued.

The 1902 eruption of Mount Pelée was the deadliest eruption of the 20th century. This volcano is found on the island of Martinique in the Caribbean, which is an overseas region of France. Intense phreatic eruptions began on April 3 of that year and produced ash so heavy that it was completely dark at times.

On May 5 as the volcano continued erupting, volcanic mudflow rushed down the mountain destroying a sugar mill, burying 150 people alive, and caused three tsunamis that damaged buildings on the coast.

But that wasn’t the end of it. The phreatic explosions turned into magmatic ones as lava made its way out of the volcano and rushed towards the city of Saint-Pierre at speeds of a hurricane.

About 28,000 who were in the city died from severe burns or were crushed and buried by debris. A firestorm broke out/ due to the hot ash igniting cases of rum.

Very few people survived—only two people within the city itself made it out alive, as well as a few others who were on the outskirts. Even so, all of the survivors had to tend to the horrible burns they sustained from the lava.

Altogether, around 29,000 people were killed. Would you rather run away from a volcanic mudslide, or from a tsunami wave? 10:59 NOW PLAYING 7 Aquatic Animals with th 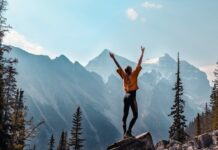 Top 10 Creepiet Places in the World

Top 10 Most Beautiful Honeymoon Destinations in the World

9 Fun Things to Do in Joshua Tree National Park: Hikes, Sights, and Activities