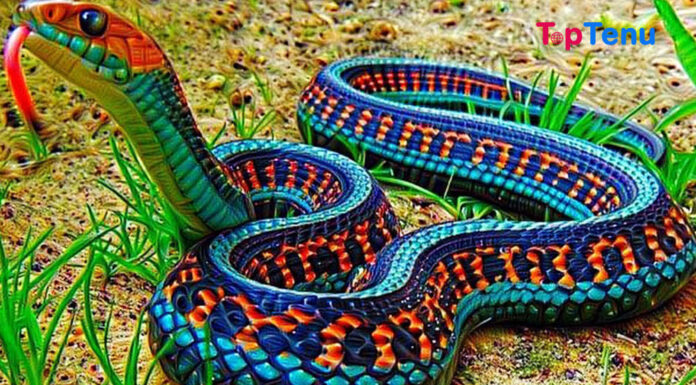 Top 10 Most Beautiful Snakes in the World

This snake has an extraordinary geometric pattern to it scales. This pattern is highlighted when the snake feels threatened and expands its body, revealing the black and white between the green scales. When relaxed, the snake has what looks like a very slender, nearly all green body. This isn’t its only defense.

According to Reptiles Magazine, “When vine snakes sense danger, they will remain motionless, but if there is a breeze, they will sway back and forth with the foliage to add to their camouflage.

At other times, for reasons yet unclear, if there is a threat, they will remain motionless with their tongue extended for minutes at a time.

This beauty is a pretty rare photograph of a Blue Racer snake. I say rare because its not often you get such a brilliant blue reflecting from the scales, as often they seem more gray in color.

The Blue Racer’s formal name is Coluber constrictor but despite this, they normally simply pin their prey to the ground and swallow them alive. They are known mostly east of the Rockies but have been seen as far south as Mexico.

Related: Top 10 Most Gorgeous Coral Reefs on Our Planet

Eastern coral snake. Micrurus fulvius is one of the most beautiful of all snakes. Unfortunately it is also very venomous, as are all coral snakes. On the good side, there are only about 15 to 20 recorded bites a year but on the bad side they are deadly and soon there will be no more antivenin for it.

Pfizer, has said that with such low demand, it is not worth the cost and research spent on it, and current stock is due to expire at the end of this year. The snakes are forest animals, living in leaf litter and brush.

They flee before biting, but if you do get bitten it is imperative you go to a doctor. Respiratory failure occurs within hours.

The green tree python is known for being green, hence the name. But that isn’t the only color that this species might be. Juvenile green tree pythons may be bright yellow, vibrant red or even a very dark brown.

While gorgeous in its adult coloration, the species is also stunning when it’s young and going through color changes. The individual shown here is in the yellow phase, with brown spots that make it look a bit like a ripening banana.

As they mature, the pythons will usually change color to a variation of green or blue, however, some green tree pythons will keep that yellow coloration for their lives.

The only reason this lovely is not in the top 3 is that it is hard to see exactly how beautiful she is from this photograph, but she is actually even more gorgeous than she appears here. She has to be one of the most beautiful snakes in the world.

The Iridescent Shieldtail, Melanophidium bilineatum , is not well known. Only three specimens are thought to have ever been caught and little is known of how it behaves in the wild. Recently some more have been seen but all that can be said for certain is that it’s beautiful and rare.

The Red-headed Krait is a highly venomous snake which inhibits forested hills, lower areas below 400 meters elevation. It is mostly found in the southern part of Thailand. The Red-headed Krait grows up to 6.9 ft. Beauty of this snake is personified in the form of its bright orange-red head with pale body and short reddish tail.

Another snake species the shimmers with rainbow iridescence is the Formosan odd-scaled snake. This is one of several species of odd-scaled snake, all of which have this same iridescent effect in their scales.

The Formosan odd-scaled snake is found in Taiwan and the southern islands of Japan. It is harmless to humans and spends its time hunting worms, frogs and other small prey.The species is nocturnal, but put it under light and its whole body dances with color!

The Honduran milk snake, is an egg laying species of nonvenomous colubrid snake. Its base color is red with distinct rings or bands of black and yellow. In some cases the yellow is actually a deep orange color and the animal in question is referred to as a tangerine phase.

The Honduran milk snake has a resemblance to the coral snake and this similarity in color, known as Batesian mimicry, helps protect the snake from potential predators.

The trait that stands out the most in this boa species is the iridescent shimmer of its scales. Glistening over the brown-and-black patterns is a sheen of rainbow colors, which show up under light. According to the National Zoo.

The iridescent sheen imparted by microscopic ridges on their scales … act like prisms to refract light into rainbows.” Found throughout Central and South America, there are nine subspecies of rainbow boa, including the Brazilian rainbow boa shown now.

Considering their unusual beauty, it’s no wonder that these large snakes, which can sometimes reach up to seven feet in length, are popular in the pet trade. In the 1980s, hundreds of Brazilian rainbow boas were removed from the wild and exported for sale.

Many of the individuals did not survive the process, spurring conservation-friendly captive breeding programs available today.

Some people consider the San Francisco garter snake to be the most beautiful species in the world. That is, of course, subjective, but it’s a stunningly beautiful snake. Known for the bright turquoise stripes that run alongside deep coral and black, the snake is a sight to behold.

Unfortunately, it’s also an exceedingly rare sight. This snake is on the Endangered Species List, with perhaps as few as 1,000-2,000 adults remaining on Earth.